All racing will be governed by the Rules as defined in the current Racing Rules of Sailing (RRS), and as modified by these Sailing Instructions.

All competitors must complete a Dahlgren Yacht Club (DYC) entry form and submit it to the Race Officer or Event Coordinator prior to racing. This form will include a release of DYC and its officers, including Race Officers of any liability concerning participation in the race. Membership in DYC is required. Guest competitors may be extended temporary participation privileges consistent with normal standards of hospitality. DYC currently hosts the following racing series:

Signals made ashore will be displayed at the end of the Dahlgren Yacht Club dock. For the PHRF fleet: race abandonment or postponement prior to the Race Officer platform leaving the dock, will be announced on VHF channel 72 by the Race Officer. See 5.G.

All competitors participating in DYC sponsored events shall comply with the following safety requirements. Competitors that do not comply will be disqualified.

The schedule of DYC races are posted on the DYC website.

DYC hosts evening racing on separate nights for PHRF and Centerboard boats. The races are grouped into Spring, Summer and Fall Series for each type of boat.

Awards will be issued for 50% (rounded up, e.g. two awards for 3 competitors) of the competitors starting in each fleet in each series.

A minimum of two competitors are required at the start of a race for a valid race.

Skippers/owners participating in any Race Series will be required to provide a Race Officer and platform for the purpose of conducting the race in accordance with these sailing instructions. A minimum of two persons are required to serve on the Race Officer Platform, if the race starts/finishes beyond Light 11 in Machodoc Creek. The PHRF and Centerboard Race Coordinators shall make duty assignments for their respective series. It is the responsibility of the skipper to notify their respective coordinator if unable to perform these duties. Skippers neglecting these duties may be disqualified and disallowed from participating in the Race Series.

A Protest shall be made in accordance with the RRS 61, Protest Requirements. A Protest must be declared to the Race Officer at the finish line or on departure from race course. The actual protest form must be submitted within one hour from the time the Race Officer Platform docks or after the last Centerboard race of the day.

The Race Governor or event coordinator is responsible for appointing protest committees and ensuring protests are received, heard and decided in accordance with the RRS , Part Five, Section B. If all parties agree, an arbitrator maybe used to rule on a protest.

Scoring will be accordance with Appendix E, Scoring.

CHANGES TO THE RACE INSTRUCTION.

Any amendment to these instructions will be distributed to all competitors and posted at the DYC clubhouse. In addition, changes may be announced on VHF channel 72, if appropriate. Any amendment will be posted one hour before the Race Officer platform leaves the dock. It is the responsibility of the skipper to check for and comply with posted notices.

The meanings of visual and sound signals are stated below. When a visual signal is displayed over a Fleet flag the signal applies only to that Fleet.

↑•• ↓•
Races not started are postponed. Warning or other signal will be made 1 minute after removal.

↑••
No. of laps in a multi-lap racecourse are reduced.

Appendix D - Example of crossing finish line on each lap if finish line is on last leg of lap. 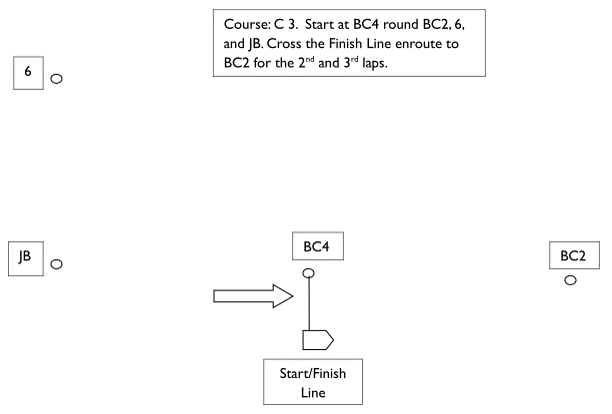 RRS Appendix A11 is modified by adding the following abbreviation:

Contact for any information or questions: DYC Race Committee - Email to: